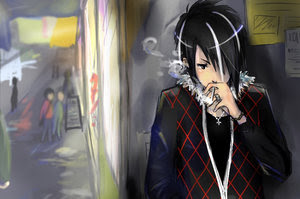 Thomas Edison was telling Mr Cary a story one day about the way his friends, when they came into his office, would help themselves to his pure Havana cigars.

"They just take 'em by the handful," he said. "Why don't you lock them up?" asked Mr Cary. "Never could remember to do it," returned Edison.

"Then, Johnson, my secretary you know, did a clever trick. He had a friend in the cigar business and promised to get him to make me some entirely of cabbage leaves and brown paper. I thought that was a fine scheme.

But the cigars didn't come, so I asked him one day about it when I noticed my Havanas disappearing again. 'Why, I sent them to you,' he said. 'I left them with your manager.' I called the manager in and asked him where those cigars were.

'Why,' he said, 'I put them in your valise when you went to California last month. I didn't know what they were.'" "Do you know, Cary," continued Edison,

"I smoked everyone of those damned cigars myself!"
Posted by Cigarettes at 4:42 AM

I like to read funny stories, this cigarettes smoking funny story is so fun. thanks for giving nice fun.
funny facebook statuses

As i go through your post, which seems to be really excellent. Its really funny. I really enjoyed a lot.
Cosplay Costume
Assassin's Creed Costumes